The E-Team is excited to share in fun blog hop with the Want2Scrap Design team. If you are new to eclectic Paperie or  Want2Scrap, here is a little information about these two creative companies. Each offer a unique line of products for all paper crafters.
eclectic Paperie(eP) is an online boutique for all who love paper crafts. There is an eclectic assortment of products, supplies, tools, and materials to assist you in your quest for creative expression. Stretch your basic paper crafting skills beyond simple scrapbooking and cardmaking. Take the next step into artistic expression by "feeding your creativity" at eclectic Paperie. You keep up new product offerings by following eclectic Paperie on Facebook, Twitter, or the eP Blog.
Want2Scrap™ manufacturers rhinestones lines including the Nestabling™ line that coordinates with the newly released Nestaboard™ chipboard line.  A variety of Nestablng and Nestaboard shapes correspond with specific Spellbinders™ Nestabilities™ die templates. Want2Scrap also manufacturers their own line chipboard albums and accents, acrylic albums, and multi-layered laser designs and other fine scrapbooking products. Want2Scrap brings ease of use and flexibility in their product lines by offering products uniquely tailored to its customers’ needs. Follow Want2Scrap on Facebook and the Want2Scrap Blog!

The E-Team & Want2Scrap Design Team were on a mission to create some fun projects using the Nestabling and Nestaboard with any coordinating Spellbinders dies, too. Come blog hop with the two teams to see what kind of creative juices resulted.
The E-Team
Broni Holcombe
Linda Duke
Latrice Murphy
Micki Harper
Sherry Cheever
Starla Nelson
Want2Scrap™ Design Team
Heidi Blankenship - Design Team Coordinator
Dana Gustafson
Elise Durenberger
Karen Taylor
Linda Duke(Yup, she's doing double duty on this one)
Mimi Leinbach
Twice the number of blog hop participants means twice the fun that includes prizes, too. Visit each E-Team and Want2Scrap participating member and leave them some feedback about their creations. One comment per person per blog, please.  You have until today, Friday, September 30th to Sunday, October 2nd to visit each blog participant.
Six random winners will be chosen from the blog hop participants. The six winners will win either a $20.00 gift voucher from eclectic Paperie OR Want2Scrap. Each company is giving away three (3) $20.00 gift vouchers.  Winners be posted on the eclectic Paperie Blog and on the Want2Scrap Blog on Tuesday, October 4th so make sure you check back to claim your prize.
eclectic_Paperie at Friday, September 30, 2011 35 comments:
Share 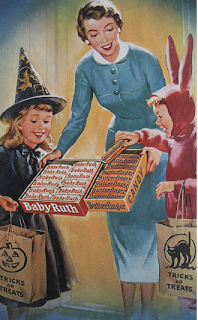 By far, there are a lot of candy corn fans out there. I guess lots of chocolate is available all year, but nothing like this time of year when those triangular white, yellow, and orange sweet treats start showing up. I really enjoyed reading all your comments about your favorite Halloween candy.


My favorite was Larissa's: 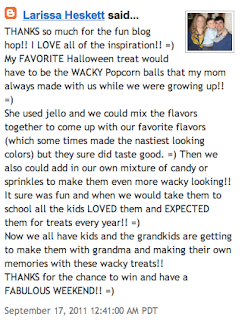 Congratulations, Larissa...you are the winner of the $25 eclectic Paperie Gift Voucher.

I have more eclectic Paperie goodies to give out so "trick or treat"! If you see your name following, please email info@eclecticpaperie.com with your name and snail mail address. We will mail out some tags, ATCs and a variety of seasonal embellishments so you can start creating some seasonal tags, too. 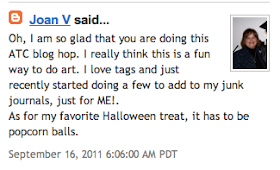 Thank you once again for joining The E-Team for this new blog hop series. We have a couple more planned with the upcoming holidays. The E-Team is also busy working on some collaborations that you are sure to enjoy.

Have a great week!

So excited to share a brand new E-Team blog hop series. I challenged the E-Team to start channeling some holiday mojo. With the crafting season picking up pace with all the fun days between now and the end of the year, this first blog hop in our Seasonal Tags, ATCs & More, is all about spooky art. 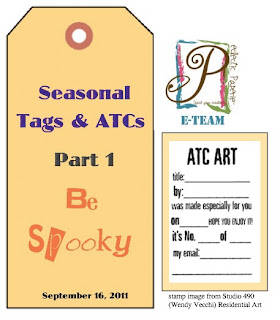 The E-Team has been creating all week and wait till you see what kind of spooky stuff they made. You will squeal with delight at the variety of projects.
Broni Holcombe
Linda Duke
Linda Ledbetter
Sherry Cheever
Starla Nelson
Micki Harper & Latrice Murphy won't be joining us for Part 1 but they will be back next time.
We have a fun giveaway to begin this new blog hop series. Visit each E-Team participant on her blog to see what she created.

We hope you enjoy this new E-Team Blog Hop series. The seasonal fun is just about to begin!

How Starbucks Saved my SIL on 9/11

With the 10th Anniversary of 9/11 this weekend, I wanted to share what I remember about September 11, 2011 because it was too close to home.

It's usually not good when your phone rings early in the morning while you are still asleep. It was my husband's sister and she said to turn on the TV. It was about 630 AM Pacific Time. Who knew what to think when we saw the images of the World Trade Center. We knew that my other sister-in-law, "RL", was supposed to leave from Washington DC that morning to return to California. RL flew a lot for her job and she had been there for a work presentation.

RL had not answered her phone so we knew she was on a plane somewhere, a plane that left from Dulles Airport. It was almost an hour that we all held our breath as watched the news. Finally, RL's husband made contact and found out that RS had safely landed in Louisville, Kentucky, as all planes were immediately instructed to land somewhere.

Here's what had happened. RL had a boarding ticket for the American Airlines Flight 77. She was supposed to be on that ill-fated flight. It was scheduled to leave Dulles Airport and go straight to Los Angeles Airport. The airline asked if anyone would be interested to get bumped off, get on a plane leaving for Chicago's O'Hare and then make a later connection with a final destination to John Wayne Airport(Orange County). RS had carry on luggage so she decided to take the offer and knew she could get some Starbucks at O'Hare while she waited for her connecting flight to Orange County.

A few things that RL has told us about the day. Her flight took off before Flight 77 so she remembers seeing the Pentagon (intact) from her plane that morning. Her plane was forced to land and all the passengers really had no idea what was going on or at least the extent of the morning happenings in New York. Everyone was questioned when they landed since really, no one knew if "that was all" the terrorists on anymore planes. RL was stranded in Louisville until flights resumed which took several days. It haunts RL to know that she was in the same boarding area/space as both the victims and terrorists. Who knows who she was standing next to. Reading the names of those who died on Flight 77 is always eerie for RL since it could have been her name in print had she not thought of Starbucks at O'Hare Airport.

If you get some free time, visit the 9/11 Memorial Website. The website has lots of photos and information. The actual memorial sits within the footprints of the World Trade Center towers. It will be dedicated this Sunday and officially open to the public on Monday. 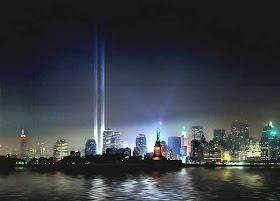 Let's honor those who lost their lives on September 11, 2001 and celebrate who they were. Remember the families left behind with big holes in their hearts. Let's also honor those first responders and the servicemen and women who have lost their lives to defend out freedom in Iraq and Afghanistan.


10 years later, I believe that THERE IS REASON TO BELIEVE. When 9/11 occurred, I was pregnant. One month later, my daughter was born on October 11, 2001. She is also now 10 and I have lots of HOPE for her and her generation.

Did you win some Paints?

Thank you for joining The E-Team for Part 6: "It's Better with Color" blog hop featuring Claudine Hellmuth Studio Products. Didn't The E-Team create some pretty projects with those awesome paints? Hope you found some inspiration and ready to try these products out, too.

Congratulations to the following winners. You each won a Claudine Hellmuth Mini Paint. I will also be sending some other fun goodies in your prize box. Please send your name and snail mail address to daisy@eclecticpaperie.com

Chris aka Scrappylassie
Please send me your name and email address to daisy@eclecticpaperie.com

Hope you all have a safe and happy Labor Day Weekend! Enjoy the last days of summer!


"It's Better with Color"
-Daisy
"feed your creativity" at eclecticpaperie.com